Getting lost at Vaishnodevi 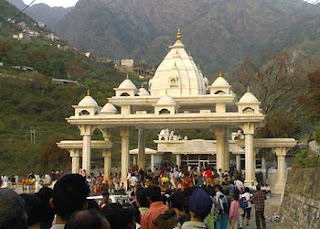 In June 2006, during our annual trip to India, my family decided to go to Vaishnodevi.

An Introduction to Vaishnodevi:

Vaishnodevi is a famous place of worship in India, located on a hill in the state of Kashmir. The temple is situated at an altitude of 6600 feet above sea level. Millions of devotees visit Mata Vaishnodevi’s temple every year. It is said that one gets to go to Vaishnodevi temple only when the Mother beckons you (“Mata Ka Bulava” as they say in Hindi). My parents had been desirous of visiting the temple for a few years – but it hadn’t materialized until the summer of 2006.

The pilgrimage starts from the bottom of the hill in a place called Katra. Most people hike from Katra to Vaishnodevi - however a few go on horseback or in a helicopter. There is a “structured” walkway to reach the shrine, but there are also steep steps to take as “shortcuts”. Thousands of people can be seen hiking to the temple and back - all throughout the day and night. The hike is 14.5 kms long and takes about 4 hours without stopping.

A special ticket to enter the temple is needed. One has to purchase the ticket at the basecamp in Katra. The ticket is checked at a couple of places on the way to Vaishnodevi. Once you reach the destination, a special line is formed for people to enter the temple. Entry to the temple is based on group numbers assigned to an individual. More details can be found from the following website:
https://www.maavaishnodevi.org/new1/index.html

The story of my experiences of visiting Vaishnodevi:

We decided to visit Vaishnodevi as a group of seven consisting of:
• My grandmother
• My parents
• Sunetra Aunty and her daughter Dolly
• My brother (Raja) and I

We left Delhi by train on June 28, 2006 before sunrise. After arriving in Jammu, we rented a car to reach Katra. We reached Katra around 5pm and decided to begin our journey immediately. Our plan was to hike throughout the night so as to beat the heat of summer at Katra.

Some people in our travelling group bought “walking sticks” at Katra to help them hike up to Vaishnodevi. I had chosen not to use a stick to help me climb the hill. My father had engaged a porter who would help us carry our luggage up the hill. The porters began hiking at a much faster pace than us. My brother was trying to keep pace with them. My father and I decided to increase our pace too. It was still very hot and humid. I could not keep up with the pace as my stomach started hurting. My father advised me to “walk at my own pace”.

The weather remained very hot and humid. As I was walking up, I found many staircases which were meant to serve as shortcuts to the shrine. So, I took most of the shortcuts and arrived at the top quickly - meaning, I arrived at the top earlier than anyone else in our travelling group! I didn’t know what to do – whether I should go to the Darshan line or go to the Guest House. All the signs were in Hindi, which I can neither read nor understand. All the people around me were speaking in Hindi!

I walked a little bit back down in hopes of spotting someone from our group, yet I couldn’t see anyone. I then walked back up & contemplated over my situation for a while. After pondering for a bit, I decided to just go for the Darshan. Upon arriving at the Darshan entrance, I asked the ticket taker/Darshan Guard if “Sandip Dasgupta had arrived at this place?” However he didn’t seem to understand much English and spoke only in Hindi. Both of us were confused, kept staring at each other while the devotees walked past us for their Darshan.

After a while, I went to the Darshan entrance again and asked, “Has Sandip Dasgupta entered here?” Finally, the guard put me into some Darshan line (which my parents reckon was some sort of a “VIP Darshan Line”!). I did the Darshan and came out with Prasad & a red mark on my forehead. I then walked back to our guest house – where we had a booking to stay for two nights or so. At that point of time, it was the early morning of June 29th, 2006, before sunrise. I had thus completed my journey to the top and Darshan without a bite to eat and without a drop of liquid!
I asked for my father’s name at the guest house and they confirmed that my father had a booking there. But they could not give me a room because my father had to first pay the money for the room. I decided to wait in the lobby of the guest house.

Suddenly, my mother & brother found me at 4am on June 29th 2006. They had all assumed that “I WAS LOST!!!”. They were overjoyed to see me. My father was then informed by the security folks that I had been “found”. Gradually all the other members of our group were informed and we were all happily united together. Now I was the experienced person in the group and I led them all to the temple for Mata’s darshan.

The parents’ side of the story – by Sandip Dasgupta

When I told Siddhartha that he could walk at his own pace, I had always assumed that he would be walking slower than us. The pathway to Vaishnodevi is very well structured – no forks or merges. Since my wife, mother, Sunetra and Dolly were walking at a slower pace, Siddhartha would always be in between Raja and myself. After walking for about an hour, we found that foot traffic had been stopped because of a landslide. So, we decided to stop and wait for the other members of our group. After about 45 minutes, we spotted the rest of our group members except for Siddhartha.

My heart started skipping beats and my wife became very nervous too. We approached the security booth and they offered to send out an alert to all their posts. They also began making announcements – but in Hindi. They also allowed me to make announcements in Bengali. My wife and I decided to go back to the basecamp in Katra on horseback to retrace the path and see if Siddhartha was to be found anywhere on the way. We knew he did not have any money, we knew he did not know Hindi and we all were feeling the extreme heat – so we were trying to imagine his situation, lost in a completely unknown place. We were unsuccessful in finding Siddhartha.

We lodged a formal complaint with the police and decided to climb up to meet the rest of our group members. We got tremendous support from the porters, the horse owners, the security men and the police. They all emphasized the fact that nobody had ever got lost at Vaishnodevi. Even a two year old who had got lost at one time was apparently found at the temple! They simply asked us to keep faith, not lose sight of our objectives and continue our journey to the temple. They insisted that we would certainly find him. Just as we began to gather our courage, we found out that three humans and five horses had died in the landslide. The dead bodies were carried away in front of us. That made us even more anxious.

We mustered the courage to restart our journey up the hill as advised by everybody around us. Suddenly we came to a fork. We decided to break up into two groups and proceed on two different paths to the temple. This would allow us to look for Siddhartha in a methodical way. The two porters told us where to meet at the top. The two subgroups were now accompanied by a porter each as a guide. Sharmila and Raja decided to go on horseback. The rest of us decided to walk. Since my mother has difficulty walking, I had asked her to climb very slowly. I began rushing up the hill with the hope of finding Siddhartha. My mind was also thinking of next steps if we were unsuccessful in finding him amongst the thousands of people that were streaming past us.

One thing that was common amongst all the devotees – they were chanting “Jai Mata Di” all through the journey and I wasn’t. So, I decided to start the same too. A hailstorm began – but that did not deter me. I kept climbing the hill and arrived at the meeting point – hoping to find Siddhartha or at least Sharmila and Raja. They were expected to reach faster because they had decided to ride on a horseback. When I did not find any of them, I was really worried. I had now lost touch with three of my family members.

Suddenly I heard my name being announced on the PA system. I was being asked to report at the nearest security station. As soon as I identified myself, they gave me the news that Siddhartha had been found and that he was at Gauri Bhawan, the hotel I had booked. My joy knew no bounds. I rushed towards Gauri Bhawan. On the way, the various horse owners and porters who had seen my plight throughout the night came up to me and gave me the good news too. I was touched to see how personally they got involved in helping me – God bless them is what I instantly wished. I found Siddhartha, Raja and Sharmila happily chatting. I checked them into the room and rushed back to give the news to Sunetra and Dolly. Then I rushed down to find my mother and gave her the good news. She had only reached halfway to the top of the hill. She had been struck by a boulder during the hailstorm and had fallen down. However, she had managed to get up and continue the pilgrimage.

After checking into the hotel, we took a shower and decided to go for the Darshan immediately as the lines were quite short. This time the experienced pilgrim in the form of Siddhartha was guiding us to the temple. We had a beautiful but hurried Darshan. Soon after that we began to feel extremely hungry as we had not eaten for over 15 hours.

We ate lunch at a restaurant, which my mother thought was the “DIRTIEST” restaurant she EVER SAW! However, we all (except for my mother) ate bowls of “CHHOLE” and freshly fried Bhaturas. Our stomachs survived the food.

The Cholle Bhature was indeed great in taste and freshness. We decided to skip the two nights of stay we had planned at Vaishnodevi and head back to Katra immediately. On the way back I saw that there were steep stairs down all the way to Katra. It was these staircases that Siddhartha had climbed up as a shortcut – I guess he took full freedom of my statement, “Walk at your own pace”.
Posted by a quarterly spiritual e-magazine. at 8:05 PM