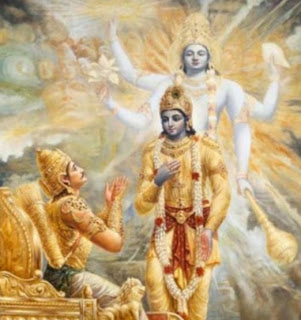 The first shloka of Bhagwad-Gita is perhaps its best known verse amongst those having a casual familiarity with this most spiritual of texts. Yet it can be argued that few are aware of the true purpose and significance of the opening shloka:

Typically, this shloka is treated as an introduction to both the context and the background of the imminent war between the two factions of the Kuru vansh – the Kauravas, and their cousins the Pandavas. It tells us that the proceedings of the war are going to be narrated by the blessed Sanjaya to the aged and blind Dhrita-rashtra.

Beyond this obvious meaning, one can search for significance. The traditional and rather easy interpretation of the shloka is that there are two sides involved in the fight - the good and the not-so-good (evil). And that physical (as well as mental) blindness is perhaps leading the king (i.e. Dhrita-rashtra) to covertly support the ‘wrong’ side.

However, as a student of ‘I’ and its manifestations, one could perhaps take a closer look at this shloka whose real significance is to introduce us to the obvious symptoms as well as the manifestation of spiritual blindness.

More specifically, if we were to focus on the first part of the second line of the shloka, we would find it alluding to Dhrita-rashtra discriminating between those on his side (maamakaah) and those presumed to be on the other side (Pandavas). Clearly we have a person here who is not only physically blind, but also spiritually blind. This blindness becomes apparent when evaluating Dhrita-rashtra’s loyalties using two approaches. From a traditional Advaita perspective, Dhrita-rashtra is someone engaged in the wrong sort of discrimination – one that’s leading him to view the Kuru clan as comprising of two separate factions pitted against each other in the pursuit of material and emotional gains. Given his limited spiritual vision, he is incapable of perceiving the unity underlying all of mankind. He does not realize that all men (or for that matter all beings) are but different manifestations of the All-pervading One.

An analysis using the ‘I’ approach leads one to a similar conclusion. The two sides ready to go to war against each other, the motivations behind the war, and the anticipated material and emotional gains (from either Arjuna’s or Dhrita-rashtra’s point of view), all manifest from the participation and activities of the weak and external 'I'. As long as this weak ‘I’ is captivated and engrossed in the play of the external 'I’, I should not hope to achieve anything more than a fleeting moment of peace. From the standpoint of the eternal and omni-present ‘I’, this is just the play of the dynamic nature of the true ‘I’. To be spiritually aware means that I recognize this and not associate/identify with it, irrespective of participating in the play or not.
Posted by a quarterly spiritual e-magazine. at 4:33 PM