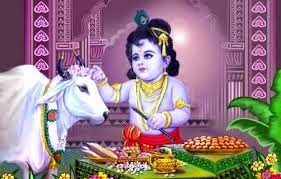 Welcome to the 2014 Janmashtami edition of our e-zine.  In the last issue, I had summarized what Sri Sri Babathakur has described to us as being the function of a Sadguru, the need of a Sadguru, and how to obtain the Right Knowledge from a Sadguru.

The question that immediately comes to mind is: What Guru Dakshina should one give to a Sadguru? While it is true that all kinds of objective knowledge warrant some kind of Guru Dakshina, Sri Sri Babathakur has very categorically stated that a Sadguru never asks for Guru Dakshina.  A Sadguru has attained Supreme Realization, where He identifies Himself with the Supreme Oneness – which is the substratum of each and every object in this world.  So where is the need for Guru Dakshina?

The Sadguru instead desires that we keep the windows of our mind and intellect open at all times.  This allows for the Sadguru’s words to penetrate deep within us.  We should then constantly reflect on His Supreme words and apply them to each thought and action in our everyday lives.  The Sadguru expects His devotees to not only surrender each and every action to the Supreme I-Reality, but also the results of such thoughts and actions.  If we are able to listen carefully to the Sadguru’s words, practice them and identify ourselves with the Supreme Consciousness, then that is the best Guru Dakshina for Sadguru – for it means that we have become true students of the Sadguru.  At that time, the seeker has attained the same Knowledge that Sadguru has imparted to the student.  No object of the material world can constitute as Gurudakshina for a Sadguru – the Sadguru is looking for us to surrender our individual-I and seek the Supreme I-Reality.

Sri Sri Babathakur further points out that if the student continues to think of himself as the individual-I (Jiva), then the student is actually insulting the Sadguru by not internalizing the words of a True Realizer. He further urges his students to constantly think of themselves as Anandaswarup, Chaitanyaswarup, Premaswarup and Amritaswarup. He states categorically that this is not a theory or a doctrine – this is Reality as It is.

So, can we all agree to keep our minds open, listen to the Sadguru’s words, reflect on them – at all times?

Posted by a quarterly spiritual e-magazine. at 11:20 PM