The Concept of Indian Temple Architecture 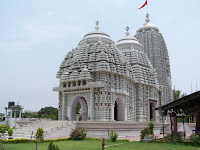 The temples in India reflect the awareness of the Hindus towards their relationship with the divine, and hence are powerful expressions of the Hindu quest for spirituality. This article is an attempt to explore the sacredness of the architectural form of an Indian temple. Various interpretations have been put forward to link Hindu beliefs to the physical structure of a temple, as also the connection between cosmology and the construction of a temple.  In this article, emphasis will be given to the fact that a temple is a sacred place for activities of worship, making offerings to a deity, and congregation of devotees for community worship.

Temples are devasthanam (i.e. dwellings of Gods), and are constructed by humans based on their experiences of designing a typical house.  It is, therefore not surprising that the architecture of a temple has been largely influenced by the pattern and style of a human residence.  Humans endeavor to make their homes comfortable by adding to them the necessary facilities (e.g. an easily distinguishable entrance gate, a covered space serving as a reception room to welcome friends and visitors, a hallway leading to the main living area of the master of the house, and other functional rooms). So is the concept of a Hindu temple; its plan and structure is similar to that of a house. Thus for a temple, we notice the torana (entrance gate), the mandapa (devotees’ meeting hall), the garbhagriha (inner chamber where the deity resides and is worshiped), the eye-catching shikhara (spire reaching up to the heavens) and the surrounding minor temples. The symbolism and significance of each component item of a temple will be elaborated in the succeeding paragraphs.


A Hindu temple is not an inert structure; it isn’t merely a huge conglomeration of blocks of stones, bricks and mortar.  It is rather alive with the chanting of the worshipers and the presence of hordes of curious visitors who come to admire the elegance of its architecture.  This should not be surprising, for devotees regularly visit temples as holy shrines all year long and particularly on auspicious days to make offerings to their chosen deity and to pray for the receipt of divine blessings.

In Hindu tradition, deities such as Krishna and Radha are represented in human form, and consequently, a Krishna temple becomes their house on earth.  The images are placed in shrines with doors and curtains to give them privacy at night and during times of rest.  There are temple rituals associated with the daily activities of waking, dressing, bathing and feeding the Gods.  In large temples, deities share their residence with servers, the priests and Pandas, and many temples have kitchens, dining rooms and store rooms. These facts support the proposition that temples are Gods’ homes on earth.

Temples are visible, concrete proofs of human attempt to bring themselves closer to the divine by creating a special space to hold this powerful and precious contact.  The use of materials like stones, marbles etc. clearly reflect human longing for an enduring relationship with divinity. A Hindu believes that the world created by God is sacred everywhere, and a Hindu home with a shrine for worship is indeed a miniature temple.   One may note that after many millennia of human religious consciousness, it is only in the last few thousand years that people have devoted huge efforts and resources towards the construction of temples.

Principles of architectural tradition may be found enshrined in treatises like the Shilpa Shastra.  Yet every temple is the result of a great deal of thought, planning and devotion, and much of the fineness of temples is owed to craftspeople, stone masons, the combined efforts and toil of society as a whole, and to the Gods themselves (who many Hindus believe, revealed their sacred plans of temple design to human in dreams).  Many Indian kings took on divine characteristics as part of their duty to patronize the construction of temples.

Temple as a replica of Cosmos


The design and construction of a temple is a form of art in a grand scale, and takes one’s mind away from the mundane to have a feel for the cosmos.  Humans seek to create a temple - the realm of the Gods taking residence on earth - in a way that worshipers can enter it physically as well as spiritually.  The temple architecture strives to reproduce the patterns of the universe – the towers, spires thrust upwards to the heavens.  In the mandapa, performances (story-telling, devotional songs and plays based on mythological stories) are held to re-enact myths and rituals that link the religious practices of the remote past to the worship of the present time.

Hindus believe that Mount Meru stands at the center of the world as a Cosmic Pillar.  Mountains are held as the sacred abodes of Gods.  Mount Kailash is revered by the Hindus as the abode of Lord Shiva.  Temples are attempts to capture a divine presence, a touch of the Cosmos for earth-bound humans.  A mandala (meaning a circle) provides the details of a cosmic diagram, and this has been used as the ground plan for the famous temple of Angkor Vat in Cambodia to reproduce the form of the Cosmos.


There are two main traditions of the Hindu temple – i.e. the North Indian (Nagara), and the South Indian (Dravida) type - distinguished by the position of the tower (Shikhara). In the Nagara style, the tower rises above the garbha griha, and the main entrance gate is of a lower height.  In the Dravida style, the main gate (called gopuram), supports the lofty tower consisting of progressively smaller storeys of pavilions.  Each storey is richly decorated with figures from mythology (e.g. the Rameswaram and Meenakshee temple gates).


The six main parts of a temple will be quoted here to reinforce our concept of temple architecture.


1)       The Inner Chamber – is where the image of the idol, murti, is placed and devotees believe that God resides inside the image.


2)       The Tower – The Shikhara represents the rising tower over the inner chamber and is the most prominent and the visible part of a Hindu temple.


3)       The Mandapa – also called ‘Naata Mandira’ (hall for temple dancing) refers to a pillared outdoor hall for public rituals.  Devotees use the hall to sit, meditate, pray, chant or watch the priests perform the rituals of worship.  The hall is usually decorated with paintings of Gods and Goddesses.


4)       The Front Porch – usually has a big metallic bell hanging from the ceiling.  Devotees entering or leaving the porch ring the bell as part of worshiping the deity.


5)       The Ambulatory Walkway - around the walls of the garbha griha. The devotees use the walkway for circumambulation around the deity as a mark of respect.


6)       The Reservoir – for temples far away from a river, a reservoir of fresh water is built on the temple premises.  The water is used for rituals as well as for taking a ritual bath to cleanse the body before entering the temple.

This article attempts to draw attention to the harmony and majestic beauty of Indian temple architecture and to the sacredness of a temple as an abode of Gods.  Additionally, a temple may kindle a vision of the Cosmos in the mind of the worshiper.  It is hoped that the article will inspire and stimulate interest in the mind of the readers to visit (or re-visit) a temple and appreciate the beauty of the holy site from a new, enlightened approach.

Posted by a quarterly spiritual e-magazine. at 8:46 AM