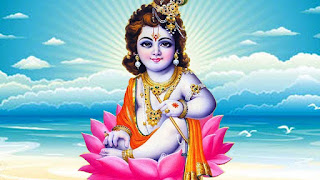 
Dear fellow seekers,
Welcome to the Janamashtami edition of our e-zine. As we continue to experience an unprecedented crisis in the age of Coronavirus, our lives seem to have permanently changed in many aspects.  As a result of the crisis, we are all able to spend a little more time listening to the Master’s nectarine words, attending more Satsangs and reflecting on His words.

On this auspicious day of Janamashtami, I have chosen to translate a very unique bhajan sung by our Master (the original in Bengali can be found in the book “Porichiti”, pg. 85-86). This bhajan was revealed to the Master while trying to answer a question posed by a group of seekers. The bhajan is a ready reckoner for our daily lives – hopefully the readers will also find it to be a very useful guide for their daily lives.

Always look at your own faults, do not look at the faults of others.
Do not ever praise yourself, but always praise others for their positive qualities.
Always increase your own abilities, do not increase your own desires.
Always think before you act, but do not think after you act.
Always perform charitable work as per your means, but do not ever expect anything in return.
Do not try to teach anything that you do not know yourself.
Do not give anything to anyone that you do not like yourself.
Do not demand love from others.
Do not hope for any results.
Do not have any desires.
In this world of manyness, there is nobody who is your own.
In the world of Infinite Consciousness, there is no Duality.
Our worldly Samsar is imagined by our minds.
Worship the Infinite Consciousness, do not worship the worldly objects.
If you worship the worldly objects, it will result in desires, birth, death and pain.
In times of sadness, think of happiness.
In times of happiness, think of sadness.
It will result in equanimity during happiness and sadness.
Always remember the Lord, inside and outside of yourself.
Maya and desires will disappear when you think of Guru all the time.
The easiest way to attain peace is to accept all with the Knowledge of Oneness.

So, on this auspicious day, let us pray to Lord Krishna that we be able to spend longer time periods reflecting on our Master’s nectarine words and practice His teachings in daily life.

Posted by a quarterly spiritual e-magazine. at 9:36 AM No comments: 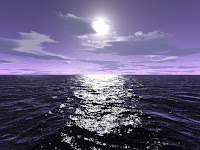 In this world, we all wish to be happy. Everyone strives for happiness, peace and contentment.  Now, how do we achieve these?  Initially we think that amassing wealth will give us happiness…. making friends…. acquiring prominence in the society…. husband…. children…. comfortable life…. good health etc., etc. But this feeling of well-being is very short-lived, it vanishes after a while. So, what is that which will give me long lasting happiness?

Few days ago, I came across a story which goes this way…. A teacher brought balloons to school and asked the children to blow them all up and then each write their name on the balloons. They tossed all the balloons into the hall while the teacher mixed them from one end to the other. The teacher then gave them five minutes to find the balloon with their name on it. The children ran around frantically, but as time ran out, nobody had found their own balloon. Then the teacher told them to take the balloon closest to them and give it to the person whose name was on it. In less than two minutes everyone had their own balloon. Finally, the teacher said, “Balloons are like happiness. No one will find it if they look for theirs only. Instead; if everyone cares about each other, they will find theirs quickly.”

Such a simple story, yet with a meaning that’s so deep.  Happiness is not difficult to find. Most of us complicate our lives by our unending desires and thus loose sight of happiness. Our wants and greed make it inaccessible. So, happiness can not be attained through materialistic pursuits. It is a state of mind that can be attained at any time, provided we develop the right attitude towards all things in life.

Love is the basic nature in every human being. Before we existed, love already existed. Look at a child.  It lives in self-acceptance, trust and love. There is no voice of doubt in him. A baby is surrounded by pure love¾  love of the mother, love of the family and love all around.  It has no concept of past and future. The baby enjoys a life of inner love.

However, as the baby grows, it gradually detaches itself from that source.  It moves from the timeless world to the world of hours and days and years, from the love of the inner world to the activity of the outer world¾ the astonishing new world draws its attention. From its state of innocence, it comes into a harsh world. As the baby grows, its original state of love and innocence is not lost forever.  It remains hidden deep within, and in due course, is simply forgotten.

Our divine Master, Prajnanpurush Sri Sri Babathakur, in His book ‘The Science of Oneness’ has taken bliss to the supreme level. He explains, ‘Human life wants lasting peace and infinite bliss or joy or happiness, but he does not know how to get that.  The joy he gets from objective enjoyment or in contact of objects through senses is not lasting or permanent. To make it permanent, he is striving everyday by his self-effort, but he is not successful. He then needs the help of a knowledge/power which is greater than his own. And that greater power or knowledge is none but Divine Himself, since Divine is the embodiment of all Power, all Knowledge, all Bliss, all Love and Peace Absolute. He is the essence of all. He is all Jnana, all Joy or Ananda and Shanti Himself.’

‘The Infinite is happiness and bliss, and in the finite, there is no happiness and bliss. Infinite is immortal and finite is mortal. Reality Itself is infinite, eternal, unchangeable and immortal, but the relativity is limited, transitory, changeable and mortal. If you consider yourself as man, then you are limited. But if you think that you are Pure Consciousness, which illumines both the gross and the subtle nature of the universe, then you are not limited and conditioned. For the realization of the same, you have to be aware of It. Only think of That at your convenience. Even at the working time you can think of It. When you have a problem or are in trouble, you just take some rest, relax yourself and think: No, I am Pure Consciousness which is the only substratum and background of all. See how the problems get solved by itself, leaving no trace of it at all. When mind itself is unreal, all its problems are unreal forever. As Self you are the Master of the Nature, not its slave.’

His golden and magical words make it sound so simple, but alas we human beings do not pay heed to it.  We instead remain preoccupied in our mundane world and imaginary thoughts, which is the real cause of all our worries and sorrows.
Posted by a quarterly spiritual e-magazine. at 9:28 AM No comments:

The following is a transliteration of one of Sri Sri Babathakur’s songs (Song No. 24 appearing within the Karma and Sadhan Tattva section of Swanubhava Sudha Vol. 2) by Sri Ramen Basu.

Pain suffering and misery
Comes to awaken Self awareness
Without suffering Knowledge dawns not
Indivisible Knowledge is the Absolute Self I-Reality Itself
His Love has no equal
Oh mind, never do you forget to accept That.
How will you follow oh mind -
Always accept everything on even awareness.
Only through the Name of Divine Mother She descends
Then you accept Her presence
Judge ye not, nor ye want to know
If otherwise,
The love of Divine Mother will be then yet to receive.
Sadguru always requests us to keep in mind
That the Divine Mother brings forth all here on this earth
To make us feel the glory of Her love.
She Herself is the Whole, the Infinite Absolute Self I-Reality.
Suffering is only in names and forms, ideas and consciousness
Mother Shyama Herself is the inspissated Wisdom Absolute
Immortal is She; Compassion incarnate
Sadhana of the Infinite Absolute Self I-Reality is to accept all in one’s Own Consciousness.


This song, transliterated by Ramen Basu and edited by Susmita Devi, is offered at the Lotus feet of Sri Sri Babathakur. In gratitude I remember Susmita, who I think was the best person to edit this poem - for her life is an example of this song.  Even in her death bed, she did not forget the teachings of Sri Sri Babathakur, Who inculcated in her, the teachings of I-principle through ‘Nectar of Wisdom’, which she herself compiled in diary-form.  She bore the cross of her past karma valiantly in order to expiate the results in this life, and learn from them.  I saw the miracle happen in her deathbed when she offered through prayer, her whole life and experiences  to I in I within, for she remembered always  ‘I am That’ as  inculcated by Sri Sri Babathakur in all circumstances.  She found Peace after that prayer and left her mortal coil two days thereafter, without any pain peacefully, totally absorbed within herself.

Posted by a quarterly spiritual e-magazine. at 9:24 AM No comments:

We also request that you send your submissions for our next (2020 Raas Purnima) issue to: sanai.na.editors@gmail.com .