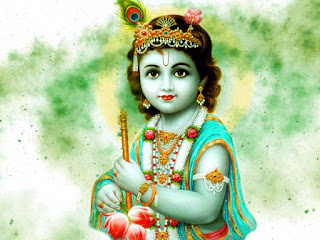 
Welcome to yet another edition of our electronic magazine as we celebrate the birth of Lord Krishna. Many of us devotees have seen Mr. Arup Das' painting depicting our Master (Sri Sri Babathakur) being completely identified with Lord Krishna.  Just as Lord Krishna had descended upon the earth to clear the air about our religion, so to had our Master come to this world to guide us about Sanatan Dharma in the language of  the present day’s society.

Sri Sri Babathakur has repeatedly told us that in today’s age, there is neither the time nor the opportunity to worship the Lord using conventional methods.  He has also cautioned us against reciting mantras without understanding their true meaning.  He has therefore gone to the root of all Knowledge and taught us the ‘Science of Oneness’ – which unequivocally states that there is only ONE God, ONE Reality, ONE substratum. He has further gone on to say that everything is a reflection of that one Reality, and this world is a drama that is being played out by all players.  He termed it as “Sportful Dramatic Sameside game of Self-Consciousness”.

Just like in a drama where various actors and actresses are assigned specific roles to play – so too have we been assigned play various roles in the world drama (which is like a sport, where somebody will win and somebody will lose). The relationships between the characters in a play are imaginary and defined by the drama writer.  The relationships are temporary and last only for the period of the drama. In our world drama, the same is true – however our mind tries to hold onto the relationships (assuming them to be permanent) and hence we suffer.  The Reality is that our mind is a reflection of our Self-Consciousness – and hence our real relationship is with our Supreme I-Reality.  In the course of a phone conversation, Sri Sri Babathakur had clearly pointed out to me that I should forget about the relationships I have with my parents, children, wife, family members etc.  That statement came as a shock to me at that time, but I think I am gradually beginning to understand the importance of that statement now.

Many of our religious texts talk about surrender. Many people attribute such a surrender to austerity and living a simple life. While that is important, I think the Science of Oneness goes much further in defining surrender. In my humble opinion, surrender means that we need to give up our false sense of belonging and ownership of objects in life. We need to think that there is only one Supreme Subject – all the objects are reflections of that Supreme Subject, and that the objects all belong to that Supreme Subject. So, all results are owned by that Supreme Subject – not by us, the mortal Jivas in this world.  Essentially it means that we need to give up our sense of ownership, sense of belonging and any sense of association to objects.  The objects of this world are derived from that Supreme Subject, and the objects also were created by the Supreme Subject. If we create a body – it will be more like a doll. It will not be functional. Such an object will become real, only when it is energized by the Supreme Consciousness – much like electricity flowing through a filament lighting up a passive bulb.  Electricity cannot be recognized as a force till it finds a medium through which it can flow. Likewise, Consciousness cannot become visible to us until a medium like Jiva is created by the Supreme Lord.

Sri Babathakur has therefore asked us to perform our duties and work normally, but be conscious of the following:


·         -  The Lord has created the roles for us to play, based on our performance in previous births (Karma Yoga).
-    -  Our current actions will dictate our role in the next birth

If we follow this what will happen? We will see the Lord all around us (in people, animals, objects etc) – because everything is a creation of that Lord. Will we then need a separate Ishwar Darshan?  Never!
But we can’t think this way – the mind always wants a sense of ownership and makes the life drama more complex!  It is the however the same Lord who is making our mind think about this sense of ownership!!!  So we again have to surrender our mind to that same Lord and ask Him to silence it in order to always remain conscious of the ONE Supreme I-Reality all the time.

So, on this auspicious day of Janamashtami, let us all pledge to reflect on our Master’s words – and try to see the Lord all around us – in every object or subject that we see, in every action which we perform, and in every result that we experience!

Posted by a quarterly spiritual e-magazine. at 12:43 PM